March 12, 2017
Its been slightly over a week since the Nintendo Switch released and as someone who was lucky enough to pre-order a system and get it on launch day, I've already put some massive hours on it. No console/handheld is right without some accessories so I'm here to break them down into two categories: grab or pass. Each picture also has a link next to it in case you would like to take the plunge and make a purchase!

(I would like to add that I have not been sponsored in any way, this post is purely my opinion on what I think is of value to you) 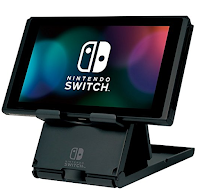 The Switch comes equipped with a small built in kickstand, however it is a bit flimsy and allows the tablet portion to fall over easy. That alone is reason enough for anyone who will be playing a lot in tabletop mode to purchase this inexpensive stand. With this in mind, perhaps the biggest flaw of the Switch is the lack of accessibility to a charging port while the console while in table top mode. The charging port is placed on the bottom of the tablet and is blocked without the use of a stand.

This one is on Amazon for only $12.99, but I'm sure that others will pop up for sale as time goes on. 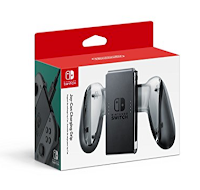 First off- I'd like to add that I almost bought this. Now that a week has gone by, I'm glad I saved my money. My biggest concern with the Switch was the lack of ability to charge the Joy-Con controllers unless they are connected to the tablet portion. The Switch comes with a controller grip exactly like this one, except what makes this product special is that in the bottom of the grip there is a place to hook up a charger.
So why DON'T you need this? The Joy-Con controllers by themselves have a 20+ hour battery life. This is more than enough time for 99.9% of gamers so the issue of controllers dying is relatively nonexistent. Just make sure you snap your Joy-Con controllers onto the tablet whenever it is docked/charging and you are good to go! 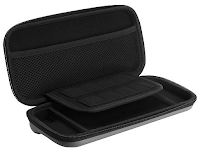 One of the biggest perks of the Nintendo Switch is the ability to flawlessly take it on the go as well as play it on your television. In the week that I've been a Switch owner, I've personally taken mine on the road twice. If you place the Switch in a bag without a case, not only are you risking scratching/damaging your console but every time something in your bag hits a button (which happens a lot) the console comes on and wastes battery. Cases aren't too expensive so make sure you grab one! 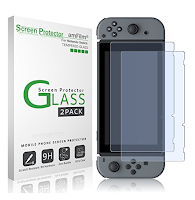 I know, I know- I said that this blog would tell you either grab or pass but honestly this on is all up to you. If you're the type of person that prefers to preserve the quality of your electronics this is a must have. However, you could also probably do without this. I have heard rumors that some people are experiencing scratches on their screens due to sliding the console in and out of the plastic dock. I personally like the reassurance that my screen has protection from falls and scratches, but the screen without the protector looks just as good. 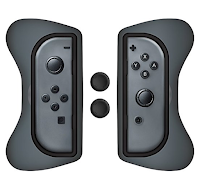 Another concern I had when per-ordering was the size of the Joy-Con controllers. The Switch has the ability play in two player mode using the Joy-Cons by themselves while turned horizontally- but would they be so small that they made your hand cramp? After playing a few hours of Snipperclips (which is a game that is WELL WORTH your $20 by the way), this hasn't proved to be an issue at all. When the wrist straps are slid onto the controllers they bulk up enough to make it comfortable to hold for even someone with the biggest of hands (and yes, these controllers were tested and approved by my husband).

The Switch is one of the first Nintendo consoles to use a common charging port: USB-C. This means that instead of dropping money on another charger, you can probably find a cord laying around your house that will charge your system. I purchased a USB-C cable to test out what life would be like without paying for a real charger. Inside the house, I am able to use a plug from my iPad with the USB-C cord plugged in and the system charges fine (it would not charge with a iPhone charger for those who are wondering). However, in the car my standard phone charger could not do the trick. Instead of charging the system on my two hour ride, it instead only slowed down the rate at which the system lost battery. So- inside the house you can find a way around buying a charger; but if you plan on playing on the run, you will want to make this purchase. 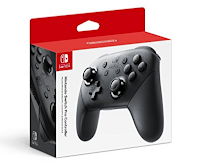 I felt that it would be odd to review Switch accessories without at least mentioning the pro-controller. I would like to add that I have not purchased or used the pro-controller and therefore felt that I didn't have the right to say anything for or against it. All I will say is that I haven't once wished I had it. The Joy-Cons are comfortable to me and I don't feel that this is something I will ever buy.

That's all for this accessory breakdown! I hope that this helps some of you Switch owners or future Switch owners decide what to buy.