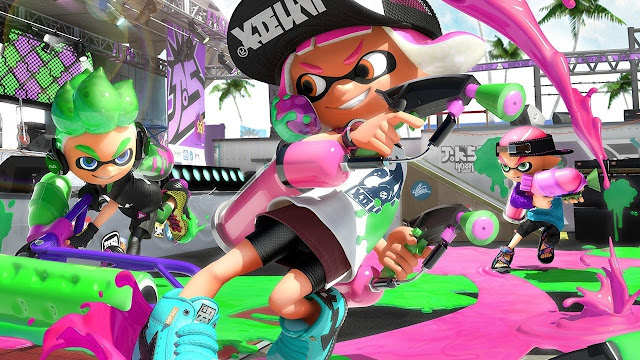 Are they kids or squids?

Sometime this Spring, the massive Wii U hit Splatoon is getting a sequel. If you were a fan of the original, and own the new Nintendo Switch, this is going to be a great weekend for you! The beta for Splatoon 2 multiplayer will be active during various time-slots to allow Nintendo to test its servers. So far, only one window has passed and as I type this the second window is less than an hour away. There is a handy chart showing the play times in all time zones attached to the bottom of this post.

During the first test window earlier today, I got a pretty decent feel for the multiplayer. Starting the test-fire app for the first time will prompt a brief tutorial to begin which lasts about thirty seconds. Next you are able to select from a variety of weapons to battle with, including a new weapon called the Splat Dualies. After the actual game is released, there will be a phone app allowing voice chat.

One thing I did NOT like was the gyroscope functionality of the the controller. Whenever you enter your first match, you must tilt the controller in order to look up and down. After a bit of trial and error I actually discovered that you can disable this function on the weapon select screen by pressing the + button on your Switch and toggling the gyroscope controls to off.

Want to give the Splatoon 2 beta a try? Head to the eStore and download the test-fire app. Occasionally the servers may fail and boot you out, but after all- this is a beta test so try not to get frustrated. The next window opens soon and you won't want to miss any opportunity to play!